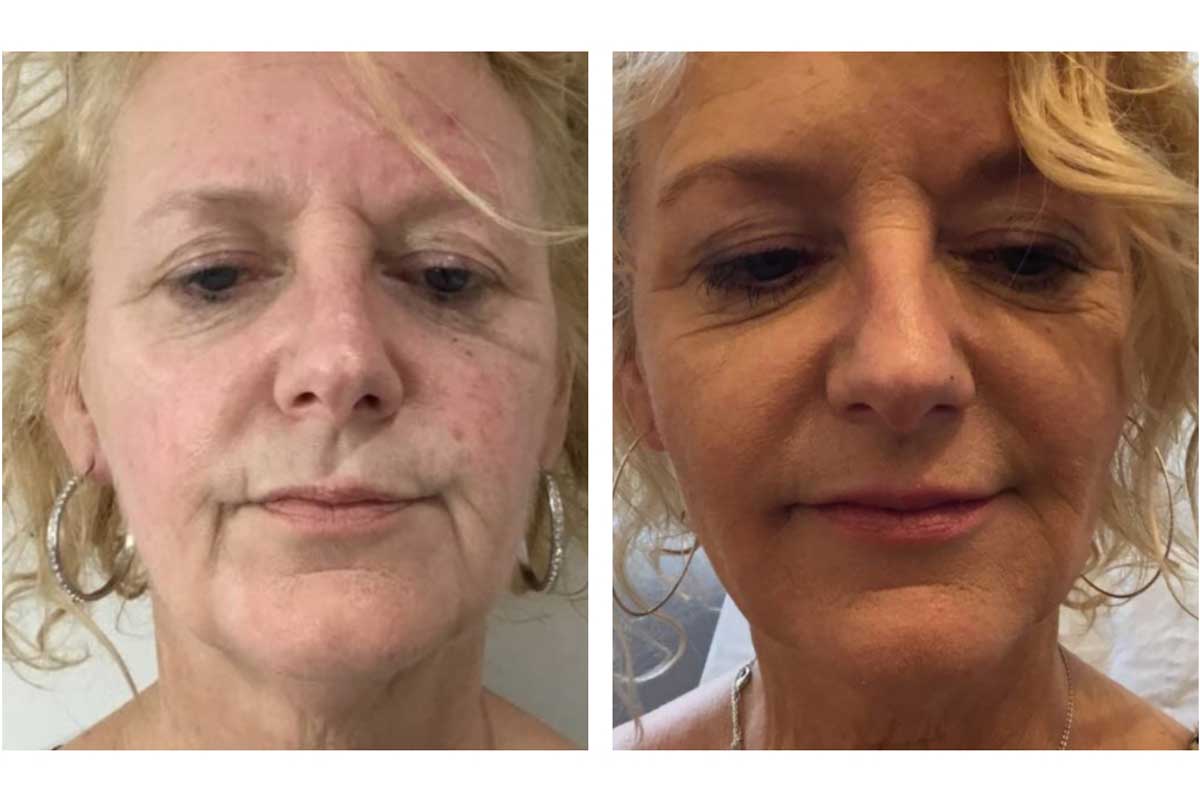 05 May Part 3 of Karen’s story – #bemoreme – Saying goodbye to the Gizzard neck!

Posted at 10:36h in Treatments by Kelly Saynor
0 Likes
Share

The holey crater was gone and the puckering nearly disappeared a night out with long-standing girlfriends was a good test.

So, today was the day; the day when I begin to wave goodbye to the ghastly gizzard neck. My face is definitely looking more me, but that crepey wobbling turkey gizzard still makes a scarf de rigeur!

I was feeling nervous although I know I’, good with pain, two babies with only gas and air, I thought needles in the thin skin on my neck could be a bit of an ouch-fest.

Fully numbed with cream and the promise of gas and air if needed Kelly began. She said she was using a combination of two different fillers to tackle the nasty neck.

I honestly never felt one single needle go in and I know she did loads. If you see the photo of my neck you can see that in the centre there’s what you could describe as a sinkhole or some other sort of hole ?

The holey crater is literally sucking the skin above and below in causing the horrible puckered look. I can only describe what Kelly did as sculpture; imagine an artist sculpting clay onto an armoire to create a face. That’s what it felt like she was doing.

When I finally got to look at my neck it was very noticeably different, the holey crater was gone and the puckering nearly disappeared!!

Now THIS is life-changing; it does feel weird to do something that’s simply just for me, but this is special, if my neck becomes ‘normal’ I’ll literally a new woman!!

My neck’s obviously a bit blotchy and swollen now so I’m off to try a Clinicare EGF Pure Mask. For £20 it’s there to take away the inflammation and rejuvenate my skin. Fingers crossed as I’m off to London tomorrow for an awards do.

Today I saw someone who’d had horrendous work done; someone half my age who didn’t need any work done, but who’d done it anyway.

Lips plumped to bursting point and brow frozen like a statue and I wondered why are we so dissatisfied with ourselves?

And who did this to her?

At no point could anyone have looked at this young woman’s ‘new’ face and thought it was an improvement on her natural face.

Someone was happy to play on her insecurities, take her money and give her treatment that made her look less attractive, older and very much not her.

Making the best of what you’ve got, want to be flipping fab at fifty is great, but doing this to a young woman seems wrong to me.

Professional practitioners like Kelly refuse to do this, but others are happy to oblige. So while I want to #bemoreme in my 50s we should spare a thought for young women who think they’re not good enough in their 20s and encourage them to #bemoreme too.